What does a taxonomist do?

Taxonomy is the science of classifying organisms, which is a part of biology. Accurate classification and naming of species underpins much biological and ecological research, and is fundamental to our understanding of biodiversity. The science of taxonomy can involve collecting specimens from the field, examining them in a lab, and determining what species they are. If the specimens are something that don’t conform to any of the known species of a genus, they are new – and get described formally. Taxonomists name (also known as ‘describing’) and classify species according to a set of rules called the International Code of Zoological Nomenclature. Taxonomy has a reputation for being a dusty relic of science, but this is completely incorrect. Taxonomy is a dynamic science, where people use cutting-edge techniques to determine who animals are, and classify them accordingly.

I am a parasitologist, with a focus on the parasites of Australian rodents and some marine fish. My research is in the taxonomy of different kinds of parasites: I have described species of parasitic nematodes and lice from rodents, and acanthocephalans (thorny-headed worms) from fish. As part of my work, I also manage a large database, the Australian Faunal Directory, which is a taxonomic checklist of all the known animals in Australia. It includes all their taxonomic histories – what they were described as initially, the different names they’ve been assigned, and what they are currently known as. As we learn more about species and discover new ones, it is often necessary to revisit the existing ones to ensure they are still classified correctly in light of the new information.

My research in parasites first started in the honours year of my science degree, where I investigated the ectoparasites (mites, fleas, ticks etc.) of small mammals in a heathland community. Combing fleas off bandicoots was so much fun and conducting my own research was extremely rewarding, so I chose to pursue it as a career. Parasitism is a very specialised way of life that I found fascinating, and I couldn’t wait to learn more. I am still learning more and more about parasites.

I did a Bachelor of Science (Hons) with a major in biological science at Deakin University, then a Doctor of Philosophy at Central Queensland University. I have worked as a research officer and academic at the Australian National University, as a lecturer at the University of the Sunshine Coast, and I am now a senior taxonomist at the Australian Biological Resources Study (part of the Federal Department of the Environment).

I love discovering new things. It is extremely exciting to look at some specimens and realise that no-one else has ever seen them before. I enjoy the challenge of describing and classifying species, because it requires precision and meticulous study of the specimens to describe them accurately. I also like working to understand the relationships between the parasites and their hosts, and their environments.

Describing my first new species was a highlight. But other highlights have included doing fieldwork in spectacular locations, being invited to speak at international conferences, meeting and collaborating with other researchers, and teaching students.

1. Love your work. Work to discover what you are truly passionate about, and what you can see yourself doing for an extended period of time. It can be a long (and at times, difficult) road to becoming a scientist, and you don’t want to get to the end and then realise that it’s not for you.
2. Talk to people in the field – learn about what is required to excel in the work you want to do. Great opportunities for work and collaboration can come out of conversations with others.
3. Never give up. Always work for a solution to a problem, and don’t be afraid to do something new or different to achieve the outcome you want. 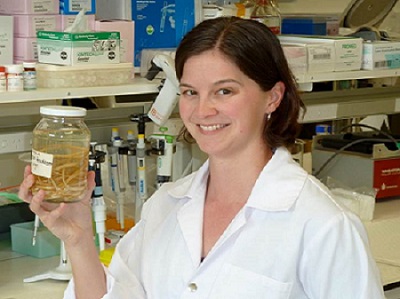 © 2020 The Queensland STEM Education Network. This project is funded by the Australian Government Department of Education and Training through the Australian Maths and Science Partnerships Programme.