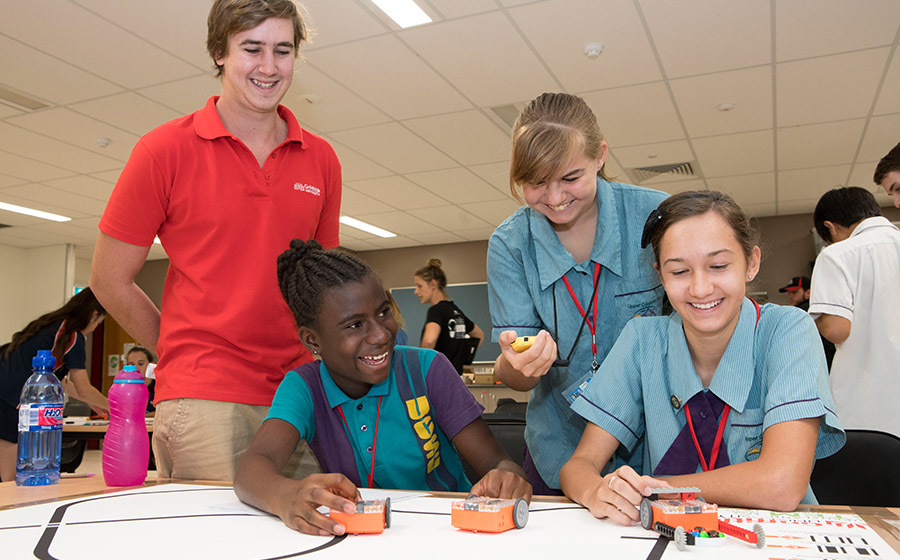 By UniversalHeadDecember 3, 2015March 10th, 2016In the Spotlight
No Comments
Play the Video

The inaugural STEM Cup has been decided, with “The Stemies” from Pimpama Secondary College taking out the Secondary Division and “The Minions” from Highland Reserve State School successful in the Primary Division.

Organised as part of the Queensland STEM Education Network, the STEM Cup is an after-school competition featuring a range of Science, Technology, Engineering and Maths (STEM) challenges.

They get to design, create and trial their projects throughout the competition in the kind of learning that takes them beyond the classroom

Education Queensland’s Northern Gold Coast STEM Community Coordinator, Ms Julia Cullen, said the hands-on experience provided by the challenges was invaluable for the students. “They get to design, create and trial their projects throughout the competition in the kind of learning that takes them beyond the classroom,” said Ms Cullen. “You can see their delight when things go well, and you can also see their frustration when something goes wrong and they have to apply themselves to rethinking and redesigning a concept.”

The Forensic Science component of the STEM Cup had the students acting as scientific sleuths as they investigated an imaginary crime scene to find clues, establish patterns, weigh evidence and draw conclusions. Queensland Police’s Officer in Charge of Gold Coast Scenes of Crime, Senior Sergeant Leon Wort, said the exercise gave students an insight into investigative processes and emphasised the important role of science in police work. The STEM Cup will return in second and fourth term in 2016 and it is anticipated that all four Gold Coast education regions will take part.