What does an ecophysiologist do?

I want to understand how different animals (both living and extinct) are adapted to the environment in which they live. Therefore I catch animals and see how well they can perform a certain task (like running or jumping) and then compare that to their body shape (form) and where they live (function).

My earliest studies examined the relationship between vision and habitat in spiders. Later, I switched my focus to the evolution of locomotion. I studied morphology, metabolic rates and biomechanics and compared these to ecological characteristics and locomotory ability in a large group of lizards, the varanids (goannas). I later continued my research at the University of Cambridge, focusing on insect adhesion, examining the multitude of solutions insects have developed to overcome the problems of sticking to smooth surfaces. At Harvard University I examined animal muscle systems, specifically how muscle change with the environment dynamically, during locomotion. My current research at the University of the Sunshine Coast continues my research into lizard locomotion, with a focus on the design of biologically inspired climbing robots.

I spent much of my childhood in the bushland behind my house chasing down anything that moved. By the time I was a teenager I had an impressive natural history collection, including pinned butterflies and insect, skulls, birds’ nests, fossils, shells and anything else I could get my hands on. Since it drove my mother so crazy I thought to myself, maybe I could do this for a living.

I started by taking a Bachelor of Science, Majoring in Zoology, at the University of Western Australia. I moved straight into doing an Honours degree at the same University and then my Ph.D. almost immediately after. Once you have a Ph.D. it is easier to move your skills overseas, which is what I did, and moved to England. I started working at the University of Cambridge and following this Harvard University in the USA. After about 6 years abroad I started missing Australia, so I applied for a Research fellowship at the University of Queensland. I was incredibly lucky to get this (they only give out 200 over all of Australia). Then when the University of the Sunshine Coast advertised that they needed a physiologist I jumped at the chance. The University had second thoughts though, and they kept me waiting for several nervous months, during which time, I guess they offered the position to a more qualified researcher. However, in the end the other researcher didn’t want the job (or I suspect won the lotto?) and so they offered it to me. So that’s all you need to work as an ecophysiologist, a lot of training in research, and even more, a lot of luck.

Being able to unlock the mysteries of the animal kingdom is the most exciting job in the world in my opinion. Everywhere we look around us are biological puzzles and I get to solve them every day. My job also takes me out of the office and into the field. I have done field work catching animals on nearly every major continent (apart from Antarctica, and only a little in South America). Further I get to present my research at international conferences all over the world. No one could hope for a better life. Except maybe being a movie star. Yeah, I would trade it all to be a movie star.

I got to do a documentary with my hero David Attenborough. It was a scene in the ‘Life in Cold Blood’ series where David comes face to face with a giant lizard. I was just off camera holding the lizard’s tail hoping that the lizard would behave and I would not forever be known as the guy who got David A’s face bitten off. Long story short, the lizard behaved, and we got the best shot ever. I latter even got to drive him to the airport. He was the nicest guy ever.

Love what you do. To become a research scientist in any field is a very long fought battle. You have to study hard for maybe 10 years or more. At every step people will criticise your work (you will actually grow to appreciate and seek this out). And in the end there will likely be no fame or fortune. The reward is the work itself. So unless you love what you do, it would be hard to work in this field. Although my long term plan is to take over the world using an army of robotic lizards, so fame and fortune might come my way after all. You never know. 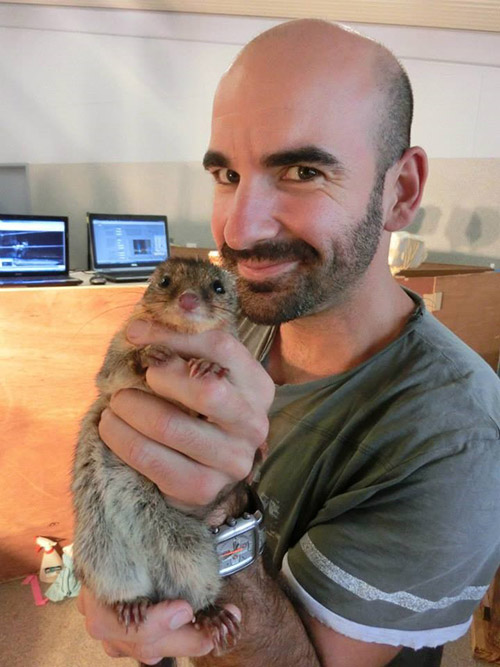 Research scientist at the University of the Sunshine Coast