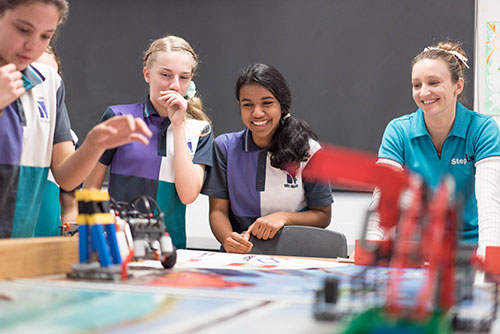 By Kay LemboAugust 30, 2016In the Spotlight
No Comments

High school students on Brisbane’s northside have celebrated the end of an eight-week robot-building journey with a community showcase of their robots at Murrumba State Secondary College.

They have spent the past two months designing and building their own small robots using LEGO Mindstorms EV3 robotics kits.

The Year 7, 8 and 9 students were helped by QUT, the Queensland STEM Education Network and Step Up during an intriguing STEM (Science, Technology, Engineering and Maths) activity that opened their eyes to new skills and future careers.

“STEM skills are increasingly critical for students’ job prospects with 75 per cent of the fastest growing occupations in Australia requiring these skills,” said Sharon Cordiner, the Deputy Principal of Murrumba State Secondary College.

“Moreton Bay STEM Fest is leading the way, bringing together local schools and working closely with QUT to provide world-class STEM learning and prepare our students for the jobs of the future.”

“Robotics encourages students to have fun with STEM concepts and gain confidence, knowledge, and skills at the same time,”

said QUT education student Suzette Argent (pictured above right, with North Lakes students), who is studying a Graduate Diploma in Education – Biology and is also a Step Up Ambassador.

“Students can practise taking risks, problem-solving and innovating in a safe, team setting. It’s interesting to see how many different ideas students come up with trying to solve these challenges.”

Moreton Bay STEM Fest partners included QUT and its widening participation projects such as Robotics@QUT, the Queensland STEM Education Network, the Australian Government Department of Education and Step Up – a Queensland-wide project, led by QUT, that aims to transform the nature and delivery of pre-service teacher education in the science and mathematics disciplines.

This year’s STEM Fest showcase finale coincided with this year’s National Science Week, which had the theme of Drones, Droids and Robots.